I attended a soccer game at the Signal Iduna Park Stadium in Dortmund. The teams playing were Borussia Dortmund VS. Apoel. The closest airport is Düsseldorf – about 1.5 hour train ride. I’m very thankful that I had a friend here because the train system was a b*tch to figure out. In fact I don’t think we ever figured it out – even with the help from information desk. Make sure to buy the correct ticket because if the staff stops you, you will have a hefty fine.

Signal Idun Park Stadium is a beautiful place – it holds over 81,000 fans and is considered one of the loudest (because of the fans). The game tied 1-1. If you plan on taking the train back, do yourself a favor and leave early before the game ends. The lines for the train were a nightmare. 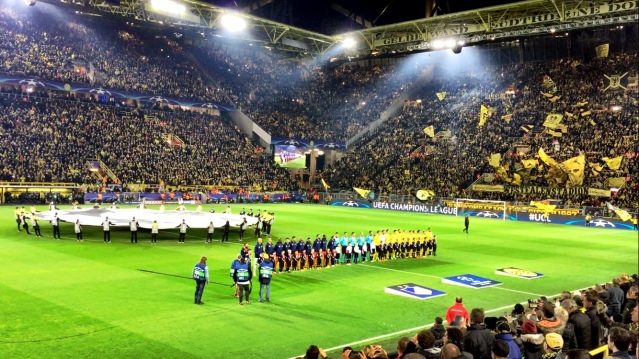 From Dusseldorf, you can take a 40 minute train to Cologne and visit the cathedral. The train drops you right in front of the church and if you want, you can hike up to the very top and see the views.

Back in Dusseldorf, make sure to check out the area near Rhine River. A lot of shopping, bars and restaurants. My flight back to Barcelona ended up being a nightmare. Apparently the flight coming in was delayed and Dusseldorf Airport has a night curfew. I had to take a bus to Cologne Airport the flight didn’t get in until 3+ hours later than the scheduled time. Under EU law, you’re entitled to compensation so we’ll see how that goes – I already submitted a claim.

← Traveling to Morocco
Traveling With Your ESA Overseas →

This site uses Akismet to reduce spam. Learn how your comment data is processed.